You have no items in your shopping cart.

Product was successfully added to your shopping cart.

Request a quote for

Need a Proposal or Have a Question? Please fill out the form below
and one of our aerial experts will be in touch immediately.

Autel EVO II: The most capable folding drone on the planet

Made In The USA with Foreign and US Components and Labor

With an airframe from China, IR/thermal cameras from FLIR in the USA, and Sony imagers from Japan, the final product is assembled in Bothell, WA with American labor. Autel also sources the majority of their bundle components from US manufacturers such as FoxFury, GPC, TacSwan, and others. Their software and other components are predominantly also from domestic and NATO suppliers. Autel is also proud to share that this solution does not require LTE for operations. Whether intelligent flight or manual flight, EVO II Dual systems function without connecting to a server inside or outside the continental United States.

Unlike other drones on the market, the EVO II series drones have no geo-fencing. That means no hoops to jump through just to fly where you need to fly and no guessing if you're going to be able to take off because of a spotty connection or firmware update.

EVO II is the only 8K folding drone on the planet. Capture content at resolutions up to a massive 8000x6000 pixels. This resolution gives users the flexibility to print images over 100 inches wide. Grab incredible screenshots, punch-in, scale, or display on massive monitors up-close. Lossless in-camera zoom up to 4x.

The EVO II Dual includes the 8K sensor as well as a 640x512 thermal imaging camera. First responders, contractors, and business owners will benefit from the highest resolution thermal imager in a package this small.

Twelve computer vision sensors controlled by a dual-core processor and AI machine learning creates omni-directional protection. Begin detecting potential hazards at up to 98ft away and let EVO II accurately control the speed of the drone to avoid a collision. There is also an option to turn the avoidance feature off and use the radar feature to keep yourself informed about the environment while maintaining full control of the aircraft. 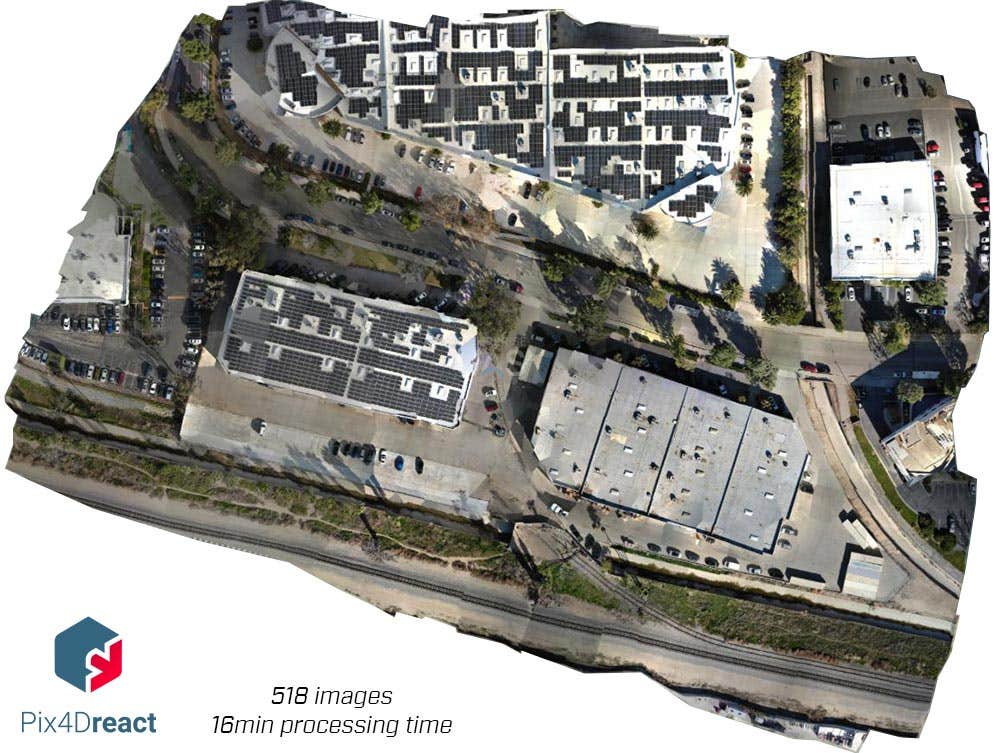 Pix4Dreact is a rapid 2D mapping software designed to work on a mid-range computer in the field and doesn’t rely on an internet connection or the cloud for processing.

With Pix4Dreact's simple tools, identify and measure points of interest, mark and evaluate your maps while on the ground to provide powerful data needed to take action.

MAKE SURE YOUR PLANS ARE BASED ON UP-TO-DATE DATA

This image shows side-by-side comparisons of satellite imagery and an up-to-date map created with Pix4Dreact. If your public safety organization was planning simply based on satellite images, the dirt area behind the building may look like an acceptable staging area. Unfortunately, there has been some construction since the satellite has updated. The up-to-date map from Pix4Dreact ensures when you're planning, you won't have any surprises like a new wall or an additional 2000 square feet of parking lot to deal with on the fly.

The full map of this building and its near surrounding area took a total of 23 minutes to create, from pulling the drone out of its bag to the final map export. All of that while also maintaining complete control of the data, which is not uploaded to or processed in the cloud.